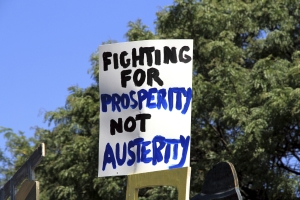 Over the last two years, Think Forward has explored a number of economic issues currently affecting young people, from the injustice of unpaid internships to the crisis of youth unemployment to rising student debt in Canada. Often we've emphasized how difficult it is for recent graduates to find stable, full-time work in their field that pays a living wage. But one topic we haven't discussed is the major advantage that unions provide to young workers in the face of austerity from both politicians and employers.

With citizens increasingly being told to "expect less" from their governments and workplaces, unions are an effective means for young workers to take control of their wages and working conditions and ensure that they are treated with dignity. By negotiating a collective agreement that guarantees good pay and benefits and respect on the job, a union empowers its members to provide for themselves while breaking down the barriers that typically divide workers. For instance, because wages and raises are spelled out in a union contract, unionized workers are less likely to suffer financially as a result of their boss favouring certain employees over others.

Over 361,000 Canadians between the ages of 15 and 24 belong to a union, which equals 15 percent of the country's workforce in that age group. And these workers enjoy a big economic advantage over young non-union employees, since they earn an average of $3.16 an hour more. That's right - whereas youth in non-unionized workplaces make an average of $13.53 per hour, young union members in Canada earn an average of $16.69 an hour, thanks to their union. As the Canadian Labour Congress points out, "those extra dollars (are) spent at local businesses, where they sustain jobs and support community services that add to everyone's quality of life." They also help young workers start their lives and support their families.

In addition to these benefits, many young union members have access to free education, training, and scholarship opportunities that help them increase their knowledge and skills and advance in their careers. And unlike in non-unionized workplaces, union members have a dispute procedure that legally protects them against unfair discipline or dismissal, as well as seniority rights for scheduling, vacation entitlements, and job security. This is to say nothing of the group discounts and better drug, dental, and vision coverage that unionized workers enjoy.

Why does any of this matter? Well, we know that part of the reason why low-paid, precarious work is on the rise (especially for young people), and why income inequality is increasing, is because union density has shrunk since 1984. But unions have largely succeeded in protecting their members from these two trends by preserving full-time jobs and ensuring that part-time workers are well-paid and respected. In other words, unions fight for shared prosperity.

So it's encouraging to see a new generation of young workers gradually embracing unions as the key to a secure and prosperous future. In the U.S., fast food workers across the country have held a series of high-profile strikes to demand a living wage and the right to unionize. In Canada, youth working at H&M and Sirens recently unionized to gain respect on the job and combat unfair treatment from management. It seems that more and more young people are realizing that, just as unions were responsible for building the middle class that many of our parents belonged to, they're likely our best tool for fighting back against austerity today.