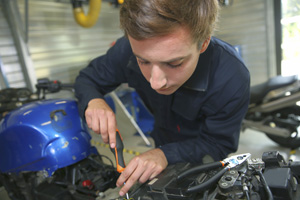 A panel tasked with advising the Province of Ontario on how it should determine future changes to the minimum wage will be submitting its recommendations to Ontario Premier Kathleen Wynne this month.

The panel heard calls for a $14 an hour minimum wage from various social justice organizations and civil society groups – including Health Providers Against Poverty and the Canadian Federation of Students – that were well-publicized in the media. But one issue that hasn't received much attention is the fact that many Ontario students are paid less than the general minimum wage.

Under Ontario law, employers can pay students under the age of 18 who work 28 hours a week or less a "student" minimum wage of $9.60 an hour, as opposed to the general minimum wage of $10.25 an hour. The wage can be paid to students who meet the age and hour requirements and who work when school is in session or during a school break or summer holidays.

In our opinion, Ontario's "student" minimum wage discriminates against young people and should be scrapped for several reasons. The first is that student workers should receive equal pay for equal work, just as female employees should be paid the same as their male counterparts. If a 16-year-old high school student works part-time as a grocery clerk and performs the same duties as a 55-year-old clerk who is paid the general minimum wage, why shouldn't the student worker receive the same wage? Having a separate minimum wage that discriminates based on age makes no sense.

Another reason why the Ontario government should axe the "student" minimum wage is because many student workers who are under 18 have to save their own money to pay for university tuition, and Ontario's undergraduate fees are the priciest in the country. Statistics Canada says undergrad students in Ontario paid an average of $7,259 in tuition fees for the 2013/2014 academic year, compared to the Canadian average of $5,772 for the same period. With Ontario students facing the most expensive tuition fees in Canada, student workers should at least be paid the general minimum wage to help them pay for school.

Finally, Ontario is the only Canadian province with a regressive minimum wage rate that discriminates based on age. Every other province has seemingly realized that singling out student workers to save employers money is bad and unethical public policy.

Of course, even if Ontario employers weren't allowed to pay student workers less, the general minimum wage isn't enough to keep students and other low-wage workers out of poverty. And that's why ACORN Canada is calling on Ontario Premier Kathleen Wynne to raise the minimum wage to $14 an hour and index future increases to the cost of living.

The deadline for submissions to the Minimum Wage Advisory Panel has passed, but there's still time to send a message to Premier Wynne by signing ACORN's petition here. In the "Personal Message" section, tell the Premier that you want to see a $14 an hour minimum wage that applies to ALL workers, including students under the age of 18. You can use some of the points in this article to back up your demand. Help bring an end to Ontario's discriminatory student minimum wage by sending your message today.