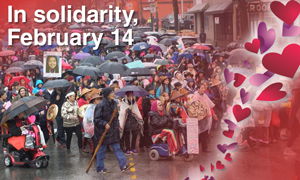 Toronto – February 4, 2017 – February 14 is a day to reflect upon the past and look toward the future to show compassion and stand in solidarity with Indigenous women and children across the country. UFCW activists and allies are encouraged to participate in February 14th Women's Memorial Marches, as well as Have a Heart Day, which was created to demand equality for First Nations children.

A listing of some of the February 14th Women's Memorial Marches can be found here.

Have a Heart Day:

The annual Have a Heart Day is a youth-based initiative founded by the First Nations Child and Family Caring Society of Canada (FNCFCS). The day is dedicated to standing up for Aboriginal children, and their equal rights to services so they can grow up safely at home, receive a good education, be healthy and proud of their cultures.

The day also serves as a stark reminder that services for Aboriginal children remain severely underfunded by the federal government.

You can support Have a Heart Day initiatives by sending a letter to the Prime Minister, or your Member of Parliament; organizing your own Have a Heart Day in your community;  making a donation to the FNCFCS; or by spreading the word online using the hashtag  #HaveAHeartDay. Visit the Have a Heart Day website to learn more.

“Getting involved does make a difference. The annual memorial marches helped push the government to finally commit to a national inquiry on murdered and missing indigenous women and girls”, says UFCW Canada National President Paul Meinema. “The Have a Heart campaign sends a message that the government must also act to honour its commitment – and court directives – to provide Aboriginal children the same level of services and educational funding that other children in Canada receive.”