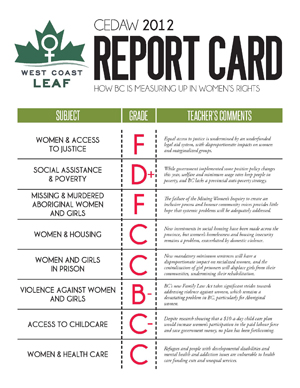 The CEDAW Report Card – administered by The West Coast Legal Education and Action Fund (LEAF) – grades the B.C. government on how well it has adhered to the United Nations Convention on the Elimination of all forms for Discrimination Against Women (CEDAW).

The Report Card monitors B.C.’s compliance between CEDAW’s 4-year reporting periods, in order to hold the government accountable both to UN standards and B.C. women. Measurements include a number of important legal and policy areas that fall within provincial jurisdiction, such as access to justice and violence against women.

For 2012, the CEDAW Report Card gave the B.C. government two Fs, one D, four Cs, and one B for overall compliance to the UN Convention, and the province’s commitment to protecting and enhancing women’s rights. To see the full report card, click here.

The grades are based on the realities of women in B.C. and represent cross-sector consultation and extensive research.

The goal of West Coast LEAF’s CEDAW Report Card project is to raise public awareness and to advocate for adequate responses to the CEDAW Committee’s concerns.

For more information on the CEDAW Report Card and The West Coast LEAF, click here.