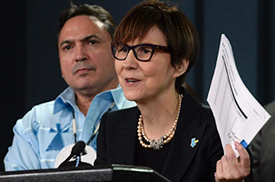 Toronto – September 22, 2016 – A new film documents the decade-long legal battle to end the discrimination against tens of thousands of Aboriginal children by the federal government when it comes to funding for health care, education and social services on reserves.

We Can’t Make the Same Mistake Twice recently premiered at 2016 Toronto International Film Festival.  Directed and produced by Alanis Obomsawin, the film follows the precedent-setting historical human rights complaint first filed in 2007 by the Assembly of First Nations, and the First Nations Children and Family Caring Society (the Caring Society). UFCW Canada is a national partner of the Caring Society, which is led by social justice advocate Dr. Cindy Blackstock. UFCW Canada activists joined Dr. Blackstock and the film’s director at the Toronto screening.

The legal battle was not settled until 2016, because as the film outlines, the federal government stalled throughout the process, including the withholding of over 50,000 government documents from the complainants The film also chronicles that the government failed to follow-up on its 2007 commitment to institute a child-first funding formula to address a serious shortfall of funding for social services for children living on reserves. Finally, this year the Canadian Human Rights Tribunal ruled that the federal government does discriminate against First Nations children by depriving them of access to services readily available to all other children in Canada, and ordered the government to make remedies.

At the panel discussion following the premiere Dr. Blackstock noted that so far the response from the federal government has been inadequate, and that it will take at least $216 million dollars to rectify the existing shortfall in services facing over 161,000 Aboriginal children. Yet, in its spring 2016 budget the federal government allotted just $70 million. Dr. Blackstock challenged the audience to continue the fight to build public awareness, and to appeal to MPs and to the Prime Minister demanding change.

UFCW Canada is proud to stand with the Caring Society and Dr. Blackstock in support of the iamawitness campaign and the Caring Society’s initiatives to bring equity to First Nations communities across Canada.  To find out more about UFCW Canada’s work for Aboriginal justice see www.ufcw.ca/socialjustice.