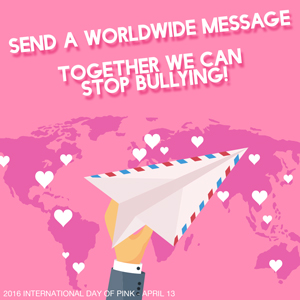 Toronto – April 11, 2016 – The International Day of Pink is annually commemorated on the second Wednesday of April. The day’s history reaches back to Nova Scotia, where in 2007, grade 12 students Travis Price and David Shepherd defended a younger student who was being bullied at school for wearing a pink shirt. In solidarity with this student, Travis and David wore pink tank tops and inspired other students to also don pink shirts at school a few days later. Their bold stand against bullying then grew into a global movement.

The International Day of Pink is about the power that we hold as individuals and as a union to be part of the solution to bullying. The statistics tell us that bullying – defined by the Day of Pink organization as a targeted and repeated form of abuse at the hands of peers – affects one in three kids in Canada.

UFCW Canada is honoured to celebrate this year's International Day of Pink, a day which is intended to send the message that when we see discrimination, we must stop it. As a union, our commitment to worker safety extends beyond workplace rights. It is also about supporting workers' access to safe spaces through allyship and the support of important initiatives such as the Day of Pink.

Here are some ways that you can support the International Day of Pink:

Putting a stop to bullying is within our reach!