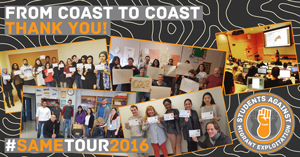 Toronto – April 7, 2016 – The 2016 Students Against Migrant Exploitation (SAME) tour recently came to a close after travelling across the country in its campaign against migrant exploitation.

SAME is one of Canada's leading social justice organizations, specializing in engaging youth on the challenges facing of migrant workers in Canada. SAME’s advocacy is delivered face-to-face, to thousands of young people annually, and countless more through innovative social media campaigns.

This year was no different. Throughout the month of March, SAME youth coordinators met with over 6,000 youth, informing them about the plight of migrant workers through traditional and artistic means including music and visual arts to promote cross-cultural understanding.

The 2016 SAME tour, which started in late-February at the KDocs Film Festival in British Columbia, has gone across the country in an effort to inspire young people to take a stand against migrant worker exploitation. Throughout the tour, the group visited over 60 schools and campuses, as well as community events such as the Law in Action Within Schools (LAWS) Annual Global Citizens conference, and the 24th Annual George Brown College Labour Fair, where SAME delivered an unprecedented six presentations in three days.

"This year's tour has been extraordinary. I would like to thank all of those involved on making this one of the best tours in the history of SAME," says SAME co-ordinator Pablo Godoy. "We've had more students and young people pledge their support to volunteer more than ever before, and we are also looking at launching a few more chapters next year."

The tour concluded with a presentation at the International Migration Research Center in Waterloo, Ontario during National Farm Worker Awareness week.