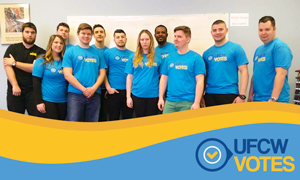 Winnipeg – April 6, 2016 – UFCW Canada youth activists have launched the new UFCW Votes campaign, to encourage union members to get out and vote in the Manitoba provincial election on April 19.

The new campaign is a part of Phase 2 of UFCW Canada's Young-Worker Internship Program (YIP), which brings together ten youth activists from across Canada in an effort to promote membership engagement and to also inform UFCW members of the important issues leading up to the Manitoba provincial election.

Participants will have the opportunity to learn new skills and work hand-in-hand with the union at a closer capacity, as well as to bring awareness to some of UFCW Canada Local Union community outreach work.

UFCW Votes aims to strengthen membership voting participation through face-to-face interactions, workshops, and by connecting through a range of social media platforms.

"This is a great initiative that encourages UFCW Canada members in Manitoba to inform themselves about the issues," says UFCW YIP co-ordinator Pablo Godoy. "It also encourages youth to learn leadership skills and gives them the ability to elevate themselves to the next step of union activism."

While Phase 1 of UFCW Canada's Young-Workers Internship Program is focused primarily on in-class training, Phase 2 is more hands-on and will give participants the experience of political campaign-building, as well as remind them of the importance of being involved in politics and their communities.