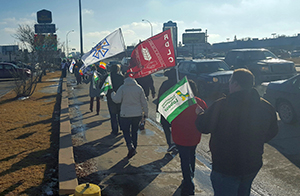 Regina, Sask. – February 25, 2016 – Community allies and labour activists from across Saskatchewan turned out in full force on Monday to support workers at the Best Western Seven Oaks in Regina, where members of UFCW Canada Local 1400 are on strike for a living wage, fair benefits, and back pay.

At a major rally held outside of the Seven Oaks Inn on Albert Street, members of the Regina District Labour Council and the Saskatchewan Federation of Labour, as well as local residents and NDP MPs from Regina and surrounding areas, waved flags and marched in solidarity with the striking Best Western workers as passing motorists honked in support.

With the strike approaching the two-month mark, the rally participants called on the company to respect the collective bargaining process by returning to the bargaining table and negotiating a fair contact.

"We're willing to sit down at the table at any time, as the members are eager to negotiate," says Norm Neault, President of UFCW Canada Local 1400. "But the company refuses to budge on several issues, and they do not seem interested in negotiating, so our fight for fairness continues," he adds.

Monday's rally preceded the launch of a series of full-page newspaper ads in the Regina Leader-Post, informing readers that UFCW Canada members have "serious reservations about Best Western Seven Oaks" and asking them to find out more at ufcw.ca/bestwestern. The print ads are being accompanied by a comprehensive online ad campaign on Facebook and Google, demanding fairness for the hard-working men and women at Best Western Seven Oaks.

To advance the call for a fair contract, the Best Western workers and their families are asking consumers, supporters, and friends to join the campaign for fairness at Best Western Seven Oaks by sending a letter to Best Western's President and CEO, David Kong.

With the full backing of the UFCW Canada National Office and its Local Unions, the Seven Oaks workers have received strong support from the public, other unions, and the federal New Democratic Party (NDP) since going on strike last December.

The striking workers' fight for fairness has also garnered local, national, and international media coverage from Reuters, CBC News, The Regina Leader-Post, Rabble, and RankAndFile.ca, among several other media outlets.

You can lend your support to the campaign for fairness at Best Western Seven Oaks by visiting ufcw.ca/bestwestern and sending a message to the company today.