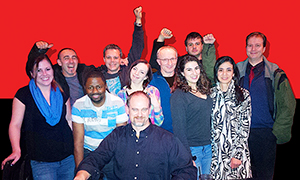 Ottawa – January 23, 2016 – Workers at the Baton Rouge Steakhouse & Bar in Ottawa, Ontario are the newest members of UFCW Canada Local 206 after a majority of workers recently voted to join the union. The downtown Ottawa location is the first-ever Baton Rouge restaurant to be unionized in Canada.

The Baton Rouge members work as servers, bartenders, kitchen staff, and hostesses for one of the most popular restaurant chains in the country. They joined the union to obtain better pay, equal treatment in the workplace, more transparency in the handling of tip-outs, and respect and fairness on the job.

The Baton Rouge members join many other restaurant employees who have chosen UFCW Local 206 as their voice in the workplace, including members at The Keg Steakhouse & Bar in Barrie and workers at various Swiss Chalet locations throughout Ontario.

"We are proud to welcome the Baton Rouge workers to the Local 206 family, and we commend them for taking a stand to create a fairer workplace for themselves and their co-workers," says UFCW Canada Local 206 President Wayne Hanley.

"We look forward to beginning negotiations with the employer as we bargain the first union contract for Baton Rouge workers in Canada," Brother Hanley adds.