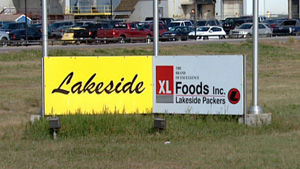 Over 2,000 UFCW Canada members in Brooks, Alberta are hopeful that a new “management services” arrangement at Lakeside Packers – Canada’s largest beef processing facility – will improve conditions in their workplace, and urge the government to put public safety first by investing in an adequate food safety system.

XL Foods recently announced that JBS-USA has taken over operations at the Lakeside facility, with an exclusive option to buy the plant for US$100 million in cash and JBS shares.

News of the management change at Canada’s largest beef processing facility comes after the plant was shut down in late September for E. Coli contamination, which was in large part caused by the Conservative agenda and heavy budget cuts to the Canadian Food Inspection Agency (CFIA).

"We believe this is a positive situation," said Local 401 President Doug O’Halloran, making reference to the fact that UFCW Local Unions in the United States have a productive, working relationship with JBS-USA.

JBS-USA is a subsidiary of JBS S.A., the world’s biggest meat packer. JBS S.A. is a Brazilian-based food processing company that produces fresh, chilled, and processed beef, chicken and pork, along with processed meats by-products. It is headquartered in São Paulo, and was founded in 1953.