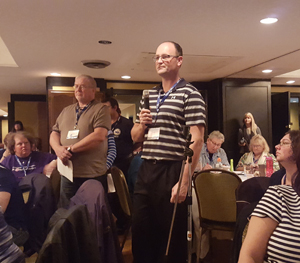 From October 23 to 24, the PEIFL welcomed delegates from across Canada to address a number of labour issues affecting Islanders in all sectors of the economy. Resolutions were debated and passed on subjects ranging from repealing Bill C-377, to fixing Canada's Employment Insurance (EI) program, to reversing cuts to Canada Post home mail delivery.

At the convention, P.E.I. Premier Wade MacLauchlan praised UFCW Canada for negotiating an industry-leading contract at Beach Point Processing, noting that the contract has not only raised wages for members working at the plant, but has also helped improve pay rates for non-unionized workers in the province's fishing industry.

"Union density in Canada is at a historic low, and that trend needs to be reversed, not only for the sake of the union movement, but for the benefit of all workers and their families," Brother Meinema told delegates. "We as labour activists have the tools and responsibility to stand with Canadians to successfully organize and bargain collectively, and to bring the union advantage to the workers who need it most," he added.

The next PEIFL Convention will be held in Charlottetown in November 2017.