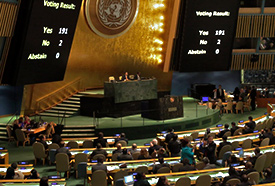 New York, NY – November 3, 2014 –The Union Nations has once again voted overwhelmingly to call on the United States to end its economic embargo of Cuba. While America and Cuba recently restored diplomatic relations in December 2014, the 54-year-old U.S. embargo still remains in place.

The latest resolution calling on the U.S. to drop the embargo was passed by the member countries of the UN General Assembly on October 29, by a vote of 191-2. This is the 24th time the UN has passed such a resolution to end an embargo that has cost the Cuban economy over $1 trillion dollars. The embargo continues to have severe impact on medical and surgical supplies, food harvesting and processing equipment, infrastructure development, and educational equipment to name just a few critical consequences.

UFCW Canada activists and allies can add their voice and send a message to end the embargo and the ongoing harm it causes Cuban citizens and families.