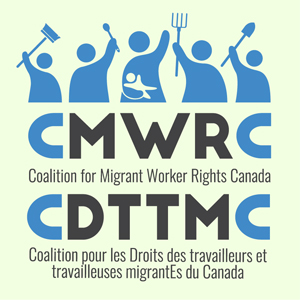 Toronto – November 3, 2015 – UFCW Canada and allies have launched the Coalition for Migrant Workers Rights Canada (CMWRC) – a national group composed of migrant-worker advocates and community partners. The CMWRC is calling on Prime Minister-designate Justin Trudeau to end the discrimination against migrant workers as well as make the concerns of migrant workers in Canada a priority.

The coalition's first campaign, MoVE (Mobility, Voice and Equality for migrant workers) is calling on the government to undo the harm done by the Harper regime and to move towards a single-tier immigration system based on permanency and family reunification to ensure decent work for all.

The coalition hopes to highlight the problems with and ways employers exploit the almost 50-year old Seasonal Agriculture Workers Program. Under the current system, low-wage migrant workers are restricted to only working for the specific employer listed on their work permit, a practice which allows employers to lower salaries and hold workers hostage to poor work conditions as well as threaten deportation when workers speak out.

CMWRC is calling for an end to work permits that tie migrant workers to a single employer, as well as granting workers the mobility to leave employers who exploit them. The next step calls for the reform of the immigration system to allow migrant workers secure, permanent immigration that protects 'voice' and 'equality' for workers.

A recently released report from UFCW Canada and the Agriculture Workers Alliance – The Status of Migrant Farm Workers in Canada 2015 – reveals how many of Canada's more than 45,000 migrant and temporary agriculture workers regularly face workplace and human rights abuses. The report also makes 19 recommended legal reforms to provide fair treatment of migrant agriculture workers.  The full report can be read here.