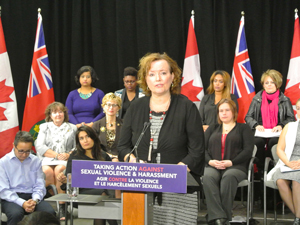 Toronto – November 2, 2015 – UFCW Canada advocacy and lobbying efforts were recently reaffirmed when UFCW Canada activists were invited to the Ontario Legislature for the tabling of new legislation that proposes to make Ontario workplaces, campuses, and communities safer from the threat of sexual violence and harassment.

The proposed legislation, the Sexual Violence and Harassment Action Plan Act, would expand the requirements on employers in their duties to protect workers from sexual harassment, including a duty to ensure that incidents and complaints are appropriately investigated.  The legislation would also require colleges and universities to have a stand-alone sexual violence policy that is regularly reviewed with student involvement. The bill would also seeks to remove the limitation period for all civil proceedings based on sexual assault, and  would eliminate the limitation period for survivors of sexual assault and domestic violence to make a compensation application to the Criminal Injuries Compensation Board.

Sexual violence affects us all, and nearly one in three women in Canada will experience some form of sexual assault in her lifetime. Some other statistics on sexual violence and harassment:

UFCW Canada has been a long-time advocate and activist for the prevention of sexual violence and harassment in the workplace, and also beyond through a number of community, social justice, and lobbying initiatives.

Click here for more information on the fight against violence against women.