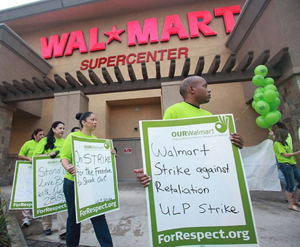 Walmart Workers from stores throughout the Dallas, Texas-area went on strike October 9 in the first-ever Walmart Associate walk-out in Dallas. Walmart workers from stores in Miami, the Washington DC-area, Sacramento, Southern California and the Bay-area are also walking off the job. Along with community supporters, the striking Associates announced that they would be taking their calls for change to Walmart's global corporate headquarters in Bentonville, Arkansas, where Walmart is holding its annual financial analyst meeting. On October 4, Associates in Los Angeles walked-off the job calling for an end to the retaliation.

In support of civil rights, social justice and international solidarity, Canada’s leading voice for retail workers, the United Food and Commercial Workers Union, is joining community groups around the world in declaring their solidarity with Walmart workers across the United States who walked off the job to protest the global retailer’s attempt to silence and retaliate against workers for speaking out for improvements on the job.

“The time has come for Walmart to realize that the world is watching, and its mistreatment of workers in one country impacts the company’s reputation and prospects in other countries where it hopes to do business,” says Wayne Hanley, the national president of the United Food and Commercial Workers Union (UFCW Canada), which represents a quarter of a million workers throughout the country. “As Canadians we believe in certain fundamental freedoms, and it is our obligation to speak up whenever a corporation tries to silence workers who stand up for a better future for their families.”

“We cannot continue to allow Walmart’s attempts to silence and retaliate against workers continue,” said Stacey Cottongame, a striking worker from the Ennis, TX store.  Stacey is one of thousands of members of OUR Walmart, the nationwide Associate organization calling for changes at the company.  “Our jobs shouldn’t be on the line because we are speaking out for better jobs and a stronger community.”

The strike in Dallas comes days after Walmart Associates in Los Angeles held the first-ever strike against retaliation.  Workers striking at Walmart controlled warehouses outside of Chicago just won an end to illegal retaliation following a 21-day strike during which clergy and community supporters were arrested by riot police during the peaceful protest. Warehouse workers in Southern California were on a 15-day strike that included a six-day, 50-mile pilgrimage for safe jobs.

For more information, go to Making Change at Walmart.