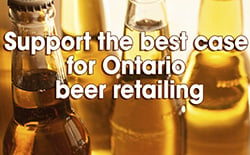 Toronto – March 14, 2015 – As speculation continues about possible changes to Ontario’s beer retailing system, “what mustn’t be forgotten is that The Beer Store provides Ontario consumers, parents and communities the highest standard of social responsibility and safety,” says Paul Meinema, the National President of UFCW Canada. “We’re talking about the safety of the public, drivers, and also about the safety of workers who are well trained in challenging customers who are underage or under the influence of alcohol.”

In 2014 alone, Beer Store employees challenged over 3 million customers for I.D., and refused to sell product to more than 60,000 for being underage or intoxicated. While the Ontario government continues to ponder other retail channels for beer and spirits, “we are concerned about what that might mean for the safety of cashiers and other staff in grocery stores and other outlets,” said the UFCW Canada leader. “Can you imagine a teenage grocery cashier facing an intoxicated or underage customer at 11 o’clock at night? Without specific training, that is a dangerous situation for all concerned.”

“Premier Wynne has stated in the past that expanding sale of hard alcohol and spirits through private retailers would raise issues of social responsibility. We agree on that,” says Meinema, “but the reality is that anyone can get just as intoxicated on any kind of alcohol. The issue of social responsibility applies just as much to beer or any alcohol product.”

The Beer Store’s proven social responsibility efforts also extend to its bottle return system that recycles over 400,000 tonnes of beer and alcohol bottles, and saves Ontario municipalities $40 million annually in waste diversion costs. Changes to the beer retailing system could eventually mean that municipalities or other retailers would have to take on the cost of that recycling themselves.

“We have brought our safety concerns to the government before, when groups like the Conservatives and the Retail Council have called to dismantle the current system,” says Meinema. UFCW Canada represents Beer Store workers, as well as thousands of members in the Ontario grocery sector. “We continue to be very concerned about the impact of proposed changes. We await to hear from Premier Wynne and look forward to ensuring that safety and social responsibility remain fundamental to alcohol sales in Ontario.”