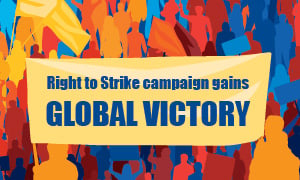 Geneva — February 26, 2015 — UFCW Canada activists, allies, and labour unions around the world are celebrating a breakthrough agreement between the International Labour Organization (ILO) and government and employer members of the ILO, which acknowledges the Right to Strike is protected under ILO Convention 87.

The victory for working people and the labour movement came in the wake of a hugely successful international union mobilisation, including a UFCW Canada digital campaign which delivered thousands of activists’ letters to Prime Minister Harper calling on the Canadian government to support the Right to Strike at the ILO level.

In January, the Supreme Court of Canada delivered its own decision affirming the right to strike as protected under Canada’s Charter of Rights and Freedoms. The latest agreement at the ILO adds further weight that the right to strike is essential to meaningful collective bargaining.

“We welcome that employers and governments who are ILO signatories have now agreed that the right to strike is protected and enshrined under ILO Convention 87,” says UFCW Canada National President Paul Meinema. “It is a fundamental right, and fundamental to the bargaining process. A negotiated settlement, without government interference, is the best and most typical way of reaching a collective agreement. The vast majority of contracts are settled this way, without a strike, because the potential for strike action makes employers take bargaining seriously.”