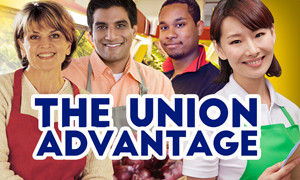 Toronto – February 4, 2015 – A new study has found that unionized workers in the United States are happier and enjoy a higher quality of life than their non-union counterparts.

The study, which was conducted by Patrick Flavin of Baylor University and Gregory Shufeldt of the University of Arkansas at Little Rock, investigated whether membership in a labour union directly contributes to a higher quality of life. It concludes that "union members are more satisfied with their lives than those who are not members...(and the) effect of union membership on life satisfaction is (significant)."

The study, entitled Labor Union Membership and Life Satisfaction in the United States, found that union membership boosts life satisfaction across demographic groups regardless of whether someone is rich or poor, male or female, young or old, or has a high or low level of education.

"These results suggest that organized labour...can have significant implications for the quality of life that citizens experience...(and) if one goal of labour unions is to boost the quality of life for their members, our study provides empirical evidence that they are succeeding," the authors conclude.

The 20-page study also identifies possible reasons why union membership improves quality of life, such as union members having a voice in their workplace and feeling more secure in their jobs than non-unionized workers. The full study can be read here.