UFCW 832 activists train to empower others 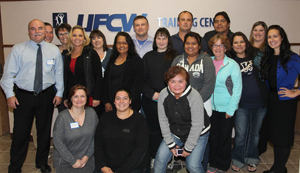 The Local 832 participants worked with UFCW 832 Organizing Coordinator Kim Ferris, and National Organizing Coordinator Debora De Angelis to learn how workers can exercise their labour rights through the Manitoba Labour Relations Act. The activists also discussed the benefits of being unionized compared to the basic requirements of Employment Standards Act. The training also focused on a variety of strategies UFCW Canada members can use to empower workers to create stronger communities and better, fairer workplace standards through unionization.

“I loved the idea of getting out of my comfort zone and doing soft investigations. The communication in class was fantastic,” said one of the steward participants.

“The week gave me the power and tools to help make positive change where we work, and in the community,” shared another participant.

The training focused on knowing the steps to joining a union and how to best communicate those steps; as well as the laws that protected the rights of workers who have yet to start negotiating with their employers as a group.

"Participants walked away with a better idea of what it means to be a union activist,” said Sister Ferris.

Adds Sister De Angelis, “It was great to see their positive energy, and the activists’ commitment that together they can play a major role in creating higher standards in their workplace and in UFCW Canada’s core industries.”

To find out more about UFCW Canada Local 832, visit www.ufcw832.ca.