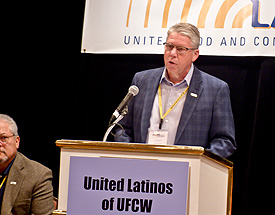 The conference featured a series of workshops to discuss issues facing Latino communities in Canada and the United States and to build clear strategies for organizing and political engagement.  “The work of the United Latinos is crucial in coordinating our efforts across borders in the fight against the anti-worker right wing attack on our unions in North America,” said Paul Meinema, UFCW Canada National President, during his address to conference participants.  “In particular, we depend on your support in our struggle to secure the rights of agriculture workers and migrant workers across Canada.”

A number of UFCW Canada members at the conference delivered presentations on how unionization has helped them achieve significant victories in their lives. Sister Elsa Alvado, a UFCW Canada Local 832 member, spoke about her experience as a temporary foreign worker in Manitoba and how her union supported her successful application for permanent residency status in Canada.

"On both sides of our shared border, our great union is a powerful force in achieving fairness, equality and opportunity," says Brother Meinema. "Our solidarity with United Latinos adds to the strength of UFCW Canada as the leading voice for Latino workers in Canada, just as UFCW is in the United States."