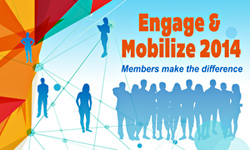 Barrie, Ont. – September 12, 2014 – The strength of UFCW Canada is and has always been the members. The UFCW Canada Engage & Mobilize Conference held recently in Barrie, Ontario, reinforced this sentiment through four days of workshops that brought together members and staff from across Canada. The participants met to present and brainstorm ways to encourage more members to get actively involved as activists in their union and workplace.

In addition to exploring new ways to engage co-workers, there were also presentations on engaging the next generation of  Local Union union stewards — so when current stewards move to new challenges, new stewards can be developed to fill the needs.

At the conference, UFCW Canada National President Paul Meinema shared with the activists that "education continues to play a key role in UFCW Canada’s strategy for growth and strength. As members learn more about the vital role their union plays in workplaces and society, they are better prepared to also engage with their co-workers to join the fight against corporate greed and the defence of workers' rights.”

The message resonated throughout the conference as a number of  presentations focused on reaching out to members through telephone town halls, social media, as well as ambassador programs, to name a few. "Let's mobilize every opportunity for the membership to connect, be engaged, and empowered," said Brother Meinema. "Solidarity means we are all in this together."