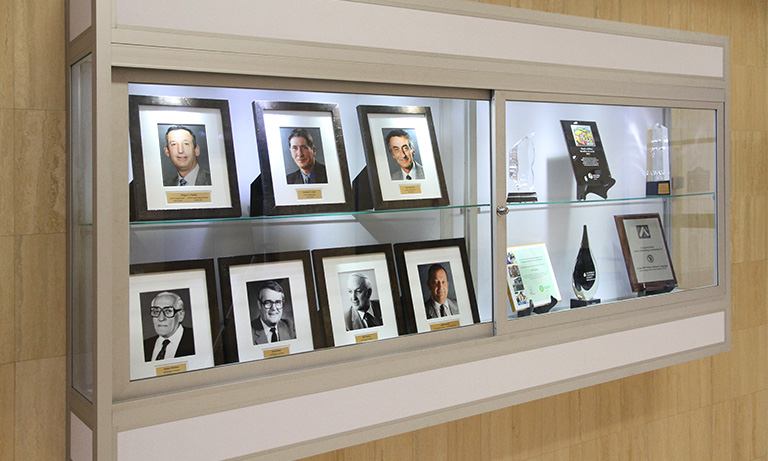 Toronto – August 22, 2014 – As Canada’s best union for private sector workers, UFCW Canada has a vibrant history of organizing workers, representing our members, and leading social justice movements. The achievements of our leaders are testament to the outstanding contributions of our more than quarter-million members from coast to coast. In recognition of our shared history, UFCW Canada has created a showcase at our National Office to highlight some of these leaders.

At its core, the original formation of UFCW Canada was built upon packinghouse workers coming together with retail clerks. At the time, unions representing meatpackers and food store workers were growing at a rapid pace, with thousands of workers in the food sector joining the ranks of the Canadian labour movement each year. Uniting packinghouse and retail workers became the noble goal of many founding leaders of what is today Canada’s most progressive union.

UFCW Canada leaders profiled in the new showcase are: Romeo Mathieu, Frank Benn, Bill Hanley, Cliff Evans, Tom Kukovica, Michael Fraser and Wayne Hanley. During their time in office, our leaders have often been recognized for the exceptional achievements of our membership, including prestigious awards in the fields of international solidarity, migrant worker rights, fundraising for the life-changing work of the LLSC,and LGBT rights. Awards now on display in the Leadership Showcase include recognition of our members’ achievements in areas such as: donating to reconstruction efforts following Typhoon Haiyan in the Philippines, support for the United Way, dedication to the agriculture workers struggle, organizing community events for the White Ribbon campaign to end violence against women, and fundraising for the Leukemia and Lymphoma Society of Canada.

Today, UFCW Canada has become the leading union for workers in virtually every sector of the economy – from retail and food processing to health care and industrial. What distinguishes our union in the Canadian labour movement is our ability to represent literally thousands of unique types of workers with one strong voice – at work, at the bargaining table and in our communities. Next time you visit our National Office, be sure to take a moment to reflect on our achievements as you view our Leadership Showcase.