Quarterly report shows Target is missing the mark with Canadians 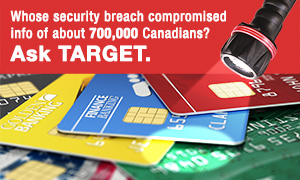 Toronto – August 20, 2014 – The latest quarterly report from American retail giant Target shows that Canadians aren't buying into the company's empty promises and disrespect for workers and shoppers in Canada.

On Wednesday, the company's second-quarter financial report confirmed that Target's expansion into Canada continues to be a money-loser with more than $204 million lost on ongoing Canadian operations reported in the second quarter of 2014 — this on top of the almost $1 billion loss Target incurred in its first year of operations in Canada.

Why have Canadian consumers rejected Target? "Target completely underestimated the value of good jobs for Canadians," says Paul Meinema, the National President of UFCW Canada. "Target promised to create good jobs but right off the bat they proved their arrogance by refusing to honour the jobs of 20,000 Zellers workers who were terminated at the locations purchased by Target. The folks that were hired were also letdown with working hours being cut in existing stores, while Target continued to open new stores."

"Add the problem of empty shelves to empty promises," says Meinema, the leader of Canada's leading union for retail workers. "By choosing to ignore experienced workers who understand inventory and by cutting the hours of their current workforce, it is no wonder consumers in Canada have rejected stores that are thin on staff and merchandise."

"At the end of the day, Target Canada's greed has cost them customers and thwarted the creation of good jobs that Target promised when it rolled into Canada."