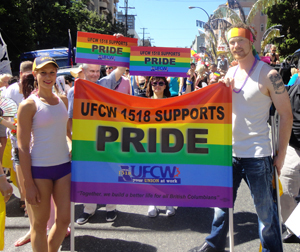 The 34th Annual Vancouver Pride Parade recently kicked off in the city’s West End under blue skies and sizzling heat. This year, an enthusiastic group of UFCW Canada Local 1518 activists proudly marched with members of the parade’s Multi-Union Pride delegation.

Won Sue Chen, Local 1518 member at Safeway 189, took part in the festivities greeting spectators and giving out gifts. "I feel if you support equal rights for the LGBTTQ community, why not come down to support the parade?" asked Sister Chen.

Over 600,000 people attended the parade this year to celebrate diversity in Vancouver, and unions played a big part in this year's event. "Labour plays an important role in supporting Pride because it shows that the union supports equal rights for all workers, regardless of their gender, race, or sexual orientation," explains Judith Ong, a proud Local 1518 member at Urban Fare 7614.

"UFCW 1518 is a union of many faces, and one voice," says Local 1518 President Ivan Limpright. "We believe in equality and diversity within our own membership and the communities they live in. We are proud to stand in solidarity with members of the LGBTTQ communities, their allies and supporters."