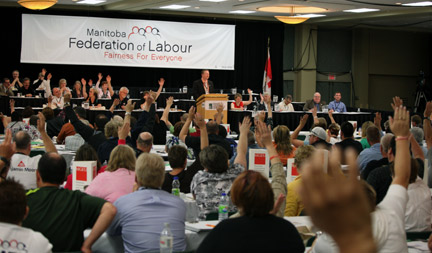 Over 400 delegates from various unions across Manitoba recently came together in Winnipeg for the Manitoba Federation of Labour (MFL) convention. Delegates discussed resolutions and listened to speakers sharing their stories about the labour movement, politics and social issues.

Kevin Rebeck will serve a second term as president of the Manitoba Federation of Labour. Kevin took over three years ago once longtime UFCW Canada Local 832 activist Darlene Dziewit retired as the federation’s leader. Local 832 President Jeff Traeger was also acclaimed as an executive vice-president, and two other Local 832 activists were appointed to the MFL executive board as vice-presidents, Local 832 Secretary-Treasurer Beatrice Bruske and negotiator Michelle Masserey.

Former UFCW Local 832 negotiator Mary Johnson received the Judy Cook award. Sister Johnson has been active with the New Democratic Party (NDP) and the labour movement for many years.

“Mary is a tremendous person. She helped turn members into activists. Her dedication to labour and the NDP is second to none,” says Brother Traeger.

Minister of Family Services and Labour Jennifer Howardtalked to the delegates about the recent announcement by the Manitoba government for an independent review of the Workers Compensation Board (WCB) rate-setting model that causes claim suppression. Companies will now have their workplace safety and health compliance histories listed on the Manitoba government website.

Premier Greg Selinger addressed the convention on Sunday, June 24, after just getting back from a summit in Brazil. Delegates made sure they let the premier know that the province must take action in banning scab labour during labour disputes and ensuring the democratic right to form a union when the majority of the workers have signed union organizing cards.