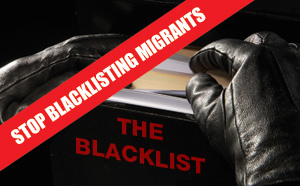 TORONTO, ON – February 16, 2012 – More than 5,000 emails in one day alone have been sent to President Felipe Calderón of Mexico telling him to stop the blacklisting of Mexican migrant who exercised their fundamental human and labour rights while working Canada.

The deluge of protest emails continue to pour in from around the world after an alert was posted on February 15 by the IUF (International Union of Food, Agricultural, Hotel, Restaurant, Catering, Tobacco and Allied Workers' Association). The IUF is a global union federation of trade unions in the agriculture, food, tobacco, and food service sectors.

The IUF alerted affiliates that Mexico has prevented pro-union Mexican migrant workers from returning to Canada. The IUF has urged affiliates to send an online message from www.ufcw.ca/stoptheblacklist , to tell President Calderón to Stop the Blacklisting and to stop the violation of the human and labour rights of Mexican workers in Canada.

Evidence indicating blacklisting activity by Mexico is currently before a labour tribunal in British Columbia.