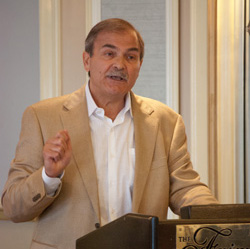 UFCW Canada would like to congratulate Paul Cavalluzzo on his appointment to the Order of Ontario, which recognizes the greatest thinkers, activists, and pioneers in the province. Brother Cavalluzzo was officially bestowed with the honour at a ceremony conducted by David C. Onley, the Lieutenant Governor of Ontario, on January 26th at Queen's Park in Toronto.

The Order recognizes Paul as "a leading constitutional, labour, and administrative lawyer" and notes his role as lead commission counsel in the high-profile Walkerton and Maher Arar inquiries. Order appointees are chosen for their outstanding contributions to law, science, medicine, and other fields. "These people change lives here and the world over," says Lieutenant Governor Onley.

As the senior partner at Cavalluzzo Hayes Shilton McIntyre & Cornish LLP, Paul has dedicated his vast legal expertise to a number of monumental legal challenges and victories that have made a meaningful difference in the fight for farm worker justice. For example, in 2006 Cavalluzzo's strategic legal leadership played an essential role in securing first-time coverage for Ontario agriculture workers under the province's Occupational Health and Safety Act. Brother Cavalluzzo has also led a series of Charter challenges in the continuing struggle to overturn Ontario's ban on farm unions.

"For two decades Paul has provided not only excellent legal counsel but also unwavering support in seeking justice and dignity for agriculture workers," says UFCW Canada National President Wayne Hanley. "We congratulate Paul on being named to Ontario's highest official honour. This is a well-deserved achievement."