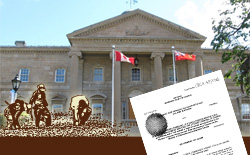 TORONTO, ONTARIO - Three Mexican migrant agriculture workers have filed a lawsuit against the Canadian government and an Ontario agriculture operator for breach of contract and damages, after the workers were repatriated without a hearing or any explanation of why they were terminated. It is the first suit of its kind ever brought by migrant workers invoking their rights under Canada's Charter.

On August 30, 2010, Manuel Ruiz Espinoza, Salvador Reta Ruiz and Jose Ruiz Sosa were ordered by their employer — Tigchelaar Berry Farms in Vineland, Ontario — to pack up and leave Canada the next day. The three men were working legally in Canada as migrant agriculture workers under the federal government's Seasonal Agriculture Workers Program (SAWP). Under SAWP, the workers and the farm operator sign a binding contract; including terms that the workers may only be repatriated for "sufficient reason".  No reason was ever given by their employer, or by the Mexican or Canadian governments.

The three men have now filed an action in the Ontario Superior Court of Justice. The suitalleges the breach of the plaintiffs' employment contracts was a violation of their rights under Section 7 of Canada's Charter of Rights and Freedoms; including their right be informed of allegations made against them, and the right be provided a meaningful opportunity to respond to the allegations. The unilateral eviction was also done without notice, or pay in lieu of notice, contrary to Ontario's Employment Standards Act.

"What has happened here is shamefully typical of a federal government system that treats migrant workers who don't have union representation like disposable commodities," says Wayne Hanley, the national president of UFCW Canada, which in association with the Agriculture Workers Alliance operates ten migrant agriculture worker support centres across Canada. "Without cause or a chance to defend themselves, scores of workers are shipped back home each season on a moment's notice, while the federal government turns a blind eye. It's a ruthless system that is meant to keep workers in constant fear and under the thumbs of the agriculture industry," says the UFCW Canada leader.

UFCW Canada is also a member of the Niagara Migrant Workers Interest Group which originally investigated the workers' repatriation. Lawyers Andrew Lokan and Michael Fenrick from the Toronto law firm Paliare Roland Rosenberg Rothstein LLP have partnered with Community Legal Services of Niagara South (CLSNS) to assist with the legal challenge which seeks $25,000 in damages for each of the repatriated workers.

UFCW Canada is Canada's largest private-sector union, with over 250,000 members working primarily in the food industry. For more than two decades the union has led a campaign to defend and uphold the human and labour rights of agriculture workers, and represents a number of agriculture bargaining units with migrant worker members in British Columbia and Quebec.