Stop Harper's Cuts! Sign the Petition to Save OUR Public Services 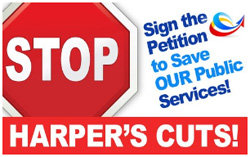 UFCW Canada is calling on all activists, friends and supporters to join our PSAC sisters and brothers in making a stand for essential services by signing a petition that orders the Harper Conservatives to stop their attack on public services and the communities they benefit.

Instead of taxing huge corporations and Canada’s wealthy elite, the Harper government is clawing back $4 billion from our public services – a reckless approach to the deficit that throws the burden of the federal government’s mismanagement on the backs of hard working Canadians.

“The Stephen Harper Conservatives are stealing another page form the Tea Party’s handbook,” says UFCW Canada National President Wayne Hanley, making a reference to the ultra-right political group in the United States that is currently waging a war on essential services and labour rights.

“Every worker in Canada needs to be very alarmed by Harper’s attack on the public service, and we all need to make a very strong stand against the Conservatives and their reckless, mean-spirited, and ideological agenda,” adds Brother Hanley. “We all have an important stake in the public service.”

To stop Harper’s cuts, UFCW Canada is calling on all activists to support a petition campaign led by the Public Service Alliance of Canada. The goal of the petition is to collect over 150,000 signatures, which will be presented to Treasury Board President Tony Clement, who chairs the committee that will make the final decision about the cuts.

“Tony Clement has a responsibility to safeguard the public services Canadian families depend on,” says John Gordon, the National President of PSAC. “Cutting public services and jobs is the wrong priority at the wrong time.”

UFCW Canada and PSAC are also asking everyone to Tweet their support for public services to @TonyClementCPC.