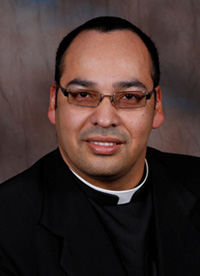 Migrant farm workers and community members in Bradford, Ontario are mourning the sudden loss of their beloved spiritual guide, Father Jose Maria Naranjo Silva. He was 42-years-old.  After a brave months-long battle against cancer, Father Jose finally succumbed on July 31, surrounded by his brother Father Ismael, Father Rony Grayda and other close friends.

Father Jose had been a strong advocate for migrant workers rights. He served as spiritual guide to workers and the community for more than five years. He faithfully served as the Canadian National Chaplain of the Spanish Cursillo Movement, and Chaplain for Mexican migrant workers labouring in the Holland Marsh area. His passion to serve other people flowed into spiritual counselling particularly for workers and community members who needed him in times of distress.  He was a firm believer of providing spiritual solution and infusing hope for those who want to find the right path.

He was born in Garzon, Huila, Colombia where he lived prior to coming to Canada in 1994.  He has ten siblings two of whom are also Ardorini priests.  One sibling, Father Ismael, served as pastor of St. Thomas Aquinas Church in Toronto for eight years.  Father Jose initially had ambitions to become an electrical engineer but he found his spiritual calling to become a priest through a prayer group.  Father Jose studied philosophy at the Immaculate Conception Seminary in Garzon and theology at the Toronto School of Theology.  In 2000, he was ordained in Colombia in the presence of his family.  Just like his brother Father Ismael, he served at St. Thomas Aquinas church for one year. In 2002, he was assigned to St. Margaret Mary Church in Woodbridge, Ontario where he eventually became the Pastor.

“The migrant worker community in Ontario is clearly devastated by the loss of Father Jose. Both my family and I knew him personally and were always struck by his deepest commitment to equity and social justice when it came to the deplorable conditions faced daily by migrant workers," says Wayne Hanley, the national president of UFCW Canada.

"In the spirit of his memory we shall continue our national and international work fight for migrant workers rights. On behalf of the 250,000 members of UFCW Canada and over 8,000 members of the Agricultural Workers Alliance (AWA), I would like to extend our heartfelt condolences to the family of Father Jose and to all the diocese members of St. Margaret Mary Church."