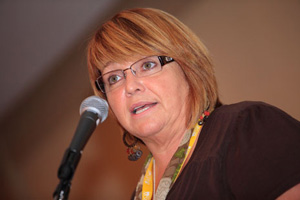 UFCW Canada Local 1000A president and long-time activist Pearl Sawyer was elected to the position of International Vice President in December of 2013. She has been the President of Local 1000A since 2011.

A renowned and well-respected leader in the labour movement, Sister Sawyer’s achievements and commitment to protecting and enhancing workplace rights and the health and safety of workers have made her a trailblazer in Ontario and beyond. In addition to serving as the president of Local 1000A – one of Ontario’s largest private-sector local unions – Pearl is also a long-time vice-president with the Ontario Federation of Labour (OFL). There, she also co-chairs the Health and Safety and Workers’ Compensation Committees.

After being hired in 1982, Sister Sawyer played a key role in Local 1000A’s stewards training program, leading and participating in contract negotiations, advocating for women and family issues and spearheading Worker’s Compensation and Health & Safety matters. She also held a variety of positions within the local union, including organizer and Executive Assistant to the President.