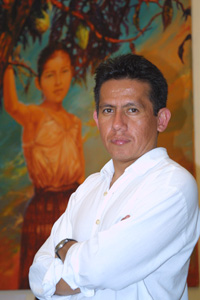 In 1965, the military dictatorship in Guatemala made a deal with INCO, and granted the giant Canadian nickel mining company huge concessions of land covering 400 square kilometres bordering on the towns of Panzós and El Estor. The INCO mining deal dislocated thousands of local indigenous people who were pushed off the land they had lived on and farmed for centuries.

On May 29, 1978, some of those displaced farmers gathered in Panzós to demand an inquiry into the land crisis they were facing caused by the deal between INCO and the military. The protesters were met by dozens of Guatemalan soldiers who were ordered to open fire and gun down the unarmed indigenous people. A forensic investigation 20 years later estimated that at least 53 people had been killed in the Panzós massacre, with dozens more seriously injured.

One of the investigators was Marlon Garcia Arriaga — a forensic photographer and artist. In the wake of this experience, over the next six years Arriaga produced a series of photographs and paintings he called "Panzós - 25 years later."  UFCW Canada was a sponsor of the Canadian tour of Arriaga's work.

The exhibition was a revelation to both the audience and the artist:

"In October of 1997, I participated as a forensic photographer in the exhumation of the massacre victims.  They were found in a common grave where their bodies had been cast indiscriminately.  This was how I had the opportunity to fill the vacuum present in the lives of Guatemalans despite 19 years of investigations into the events at Panzós.

It was with my feet in this grave, alongside the women of FAMDEGUA (Association of Relatives of the Disappeared and Detained of Guatemala), that I made the decision to create an outline for an exposition that would include my photos, paintings inspired by such moments, the testimony of survivors, newspaper clippings from the time of the war, photos from historical archives, and testimonies of intellectuals and activists who had confronted the power of the Guatemalan state and its involvement with the Canadian mining company.

The purpose of all this was to further illuminate and understand who I am and what had taken place in my country."