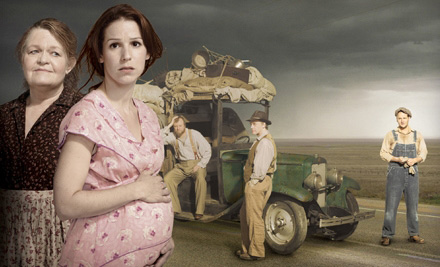 Recently, fact met fiction when two dozen migrant farm workers in southern Ontario attended a theatre performance of The Grapes of Wrath at the Stratford Festival. The play is adapted from John Steinbech's acclaimed 1939 American novel of the same name, which went on to win both a Pulitzer Prize and Nobel Prize for Literature for its portrayal of the abuse and hardship faced by migrant farm workers during the Great Depression.

The story may be decades years old, but its message is still timely. As one of the migrant workers who attended the play said, "it's amazing that so many years later the problem faced by migrants in the play are still the same problems we migrant workers face today."

The trip to the annual theatre festival held in Stratford, Ontario was arranged by staff from the National Office and from the Agriculture Workers Alliance centres in Simcoe and Virgil, Ontario, who also supplied translation services to the two dozen migrant workers in the audience. AWA social justice allies including members of Kairos, as well as from the El Sembrador organization from Bradford, Ontario also joined the group.

The Stratford production has received great reviews for its acting and authenticity; partly a result of a visit from AWA staff earlier this spring, when the actors and director asked to be filled in about the reality facing migrant farm workers in Canada.  The festival also invited UFCW Canada and the AWA to distribute the 2010-2011 Status Report on Migrant farm Workers in Canada as part of an educational kit being distributed to Ontario students attending the play.

Grapes of Wrath continues its run at the Stratford Festival until October 29, 2011.