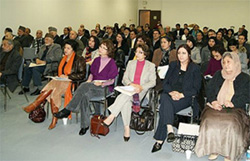 The decision by the Harper government to slash funding to immigration settlement agencies is “a cynical attack on new immigrants and their communities,” says Wayne Hanley, the national president of UFCW Canada. The ten percent cutback in funding was quietly announced just days before Christmas, with most of the cuts falling in Ontario where at least 10 Toronto-based agencies had their funding cut altogether, and 35 other Ontario agencies had their budgets reduced.

“Prime Minister Harper and Immigration Minister Kenney sent a brutal holiday shock to thousands of new immigrants and their families,” says Hanley, the leader of Canada’s largest private-sector union and one of the country’s leading organizations on immigration and migration issues. “The timing of the announcement couldn’t have been more cruel or calculating — leaving the agencies and their clients no time to respond as the country and the media were going into shutdown mode for the holidays.”

The settlement agencies help new immigrants by providing language training, job search assistance, and a host of other services essential to newcomers attempting to make Canada their home. The cutback in funding means that training and assistance will end for many thousands of immigrants across the country. “This is exactly the reason the Harper government has decided to destroy these settlement agencies,” says Naveen Mehta, the director of Human Rights, Equity and Diversity for UFCW Canada. “The Harper regime continues to be the most anti-immigrant federal government in the last sixty years.  Since many of these new immigrants can’t vote, they are an easy target for such vicious cutbacks. And while the settlement agencies get the back of the hand, the recruitment agencies that bring temporary foreign workers keep getting a big green light from the Harper government to ship in and exploit temporary workers and then ship them out when the job cycle ends.”

“The reality is that the Harper government wants immigrants to stay unsettled,” says Wayne Hanley. “So funding for the settlement agencies is slashed, while resources for the Temporary Foreign Workers program are expanded. It’s a divide-and-conquer strategy to keep both new immigrants and temporary foreign workers vulnerable and disposable. UFCW Canada will continue our national campaigns to resist such draconian policies at every step."

UFCW Canada represents more than 250,000 members coast-to-coast working in almost every aspect of the food industry from field to table, as well as in the hospitality, healthcare, warehouse, and financial service sectors. In association with the Agriculture Workers Alliance (AWA), UFCW Canada also operates ten agriculture worker support centres across Canada.