Malteurop workers on strike in Manitoba 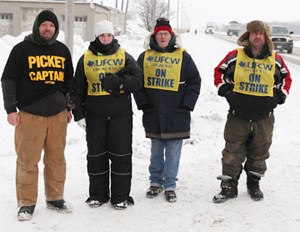 At 6 a.m. Thursday December 9, the plant employees at Malteurop in Winnipeg walked off the job to start a strike that is expected to last into the New Year. The 22 employees represented by UFCW Canada Local 832 held a strike vote in July hoping to demonstrate to the company that they were serious in obtaining a fair contract and having the company’s unnecessary concessions removed. With a total of 14 days of bargaining, including five with a provincial conciliation officer, the company seemed entrenched in pushing the members out the door.

“It became evident with its last offer that Malteurop was not serious about negotiating,” says Local 832 Secretary-Treasurer Jeff Traeger. “Our negotiating team has been very understanding and fair with a goal of maintaining what they have. The company is driven to offload the responsibility of the pension plan and divide the membership with a grandfathering clause for wages that we feel is completely unnecessary.”

Malteurop is the exclusive producer of malt for Moosehead Brewery along with micro breweries such as Half-Pints in Winnipeg.