A lifetime of activism honoured 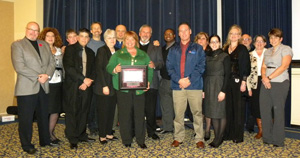 Long-time UFCW Canada activist Pearl Sawyer was recently honoured by the Ontario Federation of Labour for her lifelong commitment to fighting for improved health and safety standards in workplaces across the country.

Sister Sawyer – who serves UFCW Canada Local 1000A as Executive Vice-President – was honoured by the OFL’s Occupational Disability Response Team at an annual event hosted by the province’s Workers Health & Safety Centre. The event is dedicated to celebrating the labour movement’s health and safety achievements and recognizing the efforts of outstanding activists.

“We’ve come a long way in preventing injuries by raising awareness and creating better standards, but workers still face many health and safety threats and challenges,” said Sister Sawyer in addressing over 400 trade unionists from across Ontario.

“Finding a balance between seemingly green initiatives like cloth bags, and the well-being of workers who are told to handle them – regardless of the risks they pose – is an example of how health and safety threats change as our workplaces change, and how our work as activists is never done,” added Pearl, drawing attention to a health and safety issue currently facing UFCW Canada members in the food retail industry who regularly encounter cloth bags contaminated with blood and other hazardous materials.

In accepting her award, Pearl also looked back on her long journey as an activist, which began when she fought to become the first woman to work on the kill floor for Canada Packers in her home province of Prince Edward Island.

“Pearl’s commitment to protecting and enhancing workplace rights and the health and safety of workers and UFCW Canada members in particular is unsurpassed,” says UFCW Canada National President Wayne Hanley. “Pearl’s legacy of activism is extraordinary and through her many contributions to UFCW Canada and the Ontario labour movement she continues to make a lasting difference in the lives of working families.”