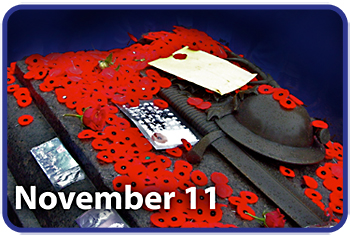 “Well I'm still alive and well but we have had a few exciting times. Our Sergeant got wounded. He was next man to me. I was sorry for he was a fine fellow. I don't know how I escaped. A big shell burst beside us and knocked Peter Ross' helmet off and he hasn’t found it yet and it buried another soldier all but up to his head. We tease Peter about it.  I will now close. Hope you are all well.”

It is testament to courage that even when faced the terror of war a soldier can be remain upbeat like the letter above from Canadian soldier David Mclean to his wife and their newborn son in Toronto — one of 150 letters he sent during the First World War until he was killed at the Battle of Vimy Ridge on April 20, 1917.

Each year since, at11th hour on the 11th day of the 11th month, we stand together as a community to remember and honour the more than one million Canadian men and women who went to war, ready to make a supreme sacrifice.

More than 100,000 Canadian soldiers have died in action since 1914.  So this November 11th on Remembrance Day, let us honour our brothers and sisters in military service by acknowledging their courage and sacrifice.