Face of Global Greed revealed to the world 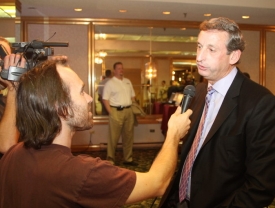 UFCW Canada members, allies and social justice activists joined some of the world’s leading globalization experts on June 21 to combine Walmart insights, share campaign victory experiences and strengthen the progressive movement’s resolve to challenge the profound impact Walmart is having on the world, its people and their rights.

The forum called Walmart: The Face of Global Greed was hosted by UFCW Canada as part of the union’s full engagement in the People’s Summit – the progressive movement’s response to the G20 meetings. The forum was held in downtown Toronto, on the edge of the city’s $1.2 billion security perimeter and just blocks away from the world’s finance and trade leaders.

“It’s especially fitting to be having this discussion just blocks away from the G20 meetings, because Walmart is globalization,” said UFCW Canada National President Wayne Hanley, while speaking to the forum about the union’s 15-year fight to help Walmart workers know and exercise their rights. “When you talk about Walmart and the impact it’s having on our jobs, our communities, and our kids’ futures, you’re really talking about what globalization means for working people and the world they live in.

“Despite Walmart’s fear tactics and the millions it’s spent on manipulating our legal system, Walmart workers still call us all the time, they still want to join  UFCW Canada, and we are still here for them and always will be,” pledged 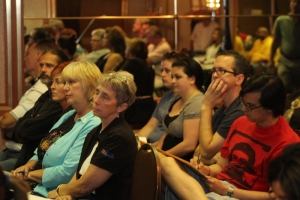 National President Hanley to the activists and journalists who attended the event.

In addition to National President Hanley, The Face of Global Greed panel included leading labour rights activists, UFCW organizers from across North and South America, and internationally renowned author Nelson Lichtenstein. The panel focused on community mobilization and answered a number of questions from the 100-plus activists who participated in the forum.

In addition to the jam-packed Toronto event, thousands of activists from around the world also attended the forum in real-time through a live video stream that was featured on ufcw.ca.

Highlights of Walmart: The Face of Global Greed forum – and many other UFCW Canada actions during the People’s Summit – are available at GEE20.ca. 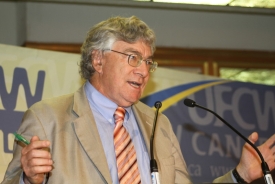